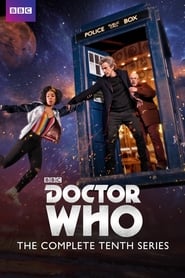 The series introduces Pearl Mackie as Bill Potts, and also features Matt Lucas as Nardole. Michelle Gomez and John Simm return as their respective incarnations of the Master. The main story arc for the first half of the series revolves around the Doctor and Nardole occupying themselves at a university while they guard an underground vault containing Missy. Missy later travels with the team in the TARDIS, and eventually partners with her previous incarnation as they battle a Cyberman onslaught.