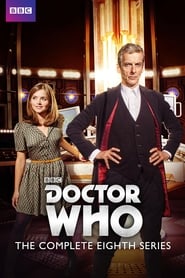 The series is the first to star Peter Capaldi as the Twelfth Doctor and Jenna Coleman as his companion, Clara Oswald. Also playing a major recurring role in the series is Samuel Anderson as Danny Pink, Clara’s boyfriend. The main story arc revolves around a mysterious woman called Missy (portrayed by Michelle Gomez), who is often seen welcoming people who have died throughout the series to the “Promised Land”, a place that serves as an apparent afterlife to deceased characters.