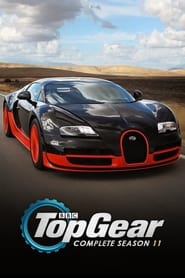 The 11th series of Top Gear was broadcast between 22 June 2008 and 27 July 2008, in show’s usual time slot of 8pm on Sunday on BBC Two. The series consists of six episodes. This series included a revised title sequence, following the same visual style as with the sequence used for Series 8 through 10, but incorporating footage from the two prior series. A new character was introduced in the first episode of the series. Also for the first five episodes of this series, the “Star in a Reasonably Priced Car” becomes “Stars in a Reasonably Priced Car”, featuring two celebrity guests every week, each one setting an individual laptime. In May 2008, after series producer Andy Wilman held a brainstorming session with the presenters and other production staff, various facts about the upcoming series were released. Wilman confirmed that series 11 would see the presenters, Clarkson, Hammond and May, gain more control over the flow of the show’s popular news segment. The series included running jokes appearing in each episode: Clarkson showing an image he claims to have found on “the Internet” which is censored for the television broadcast; and, in the news section, May appearing to feign enthusiasm whilst presenting a brief news item about the Dacia Sandero with no further discussion before they move on to the next item.