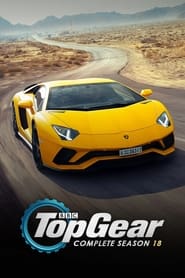 The eighteenth series of British motoring programme Top Gear began on BBC Two and BBC HD, on 29 January 2012, preceded by a Christmas special on 28 December 2011, with the usual presenting team of Jeremy Clarkson, Richard Hammond, James May and The Stig. One segment that was due to appear in the series, which featured May driving a jet plane around the test track, was not broadcast for unknown reasons, although it appeared in the Challenges 6 DVD and it showed it would have been part of the Saab feature in the series.